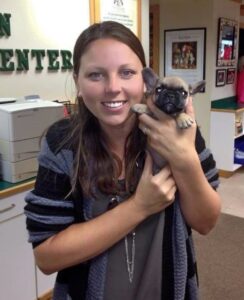 Cherish grew up in Annandale, Virginia, and lived there for 15 years before moving to Madison, Virginia. After that, her family moved all over the place, going as far as California, and now she’s back in Culpeper, Virginia. Cherish wanted to be part of the veterinary profession because she hates to see animals in pain and not be able to help them. She started at ODAHC as a Boarding Supervisor, moved to the hospital floor working as a nurse, and now she is the Office Manager.

With her experience, Cherish can help out wherever needed, from organizing reception to helping with dentals, x-rays, and lab work.

Cherish has 2 children, Bryce and Caden; 2 dogs, Dharma and Razor; 1 cat, Pita; and 1 horse, Moxley. She loves being outside working in the yard, riding Moxley, going mudding, 4-wheeling, and, most of all, playing with her girls. 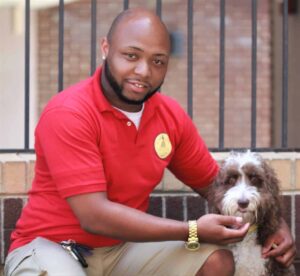 Travis was born and raised in Chicago, Illinois and currently resides in Stafford County. He grew up with a Labrador, Kush and a Great Dane named King; That’s where he first discovered his love for animals. . After completing college, he worked for his local SPCA as a receptionist and swiftly moved up the ranks to Management.

Travis has a  year old son named Tyson who loves animals and wants to be a vet when he gets older. Along with Tyson, he has a seven year old Miniature Pinscher/Chihuahua mix named Percy who won 2nd place in his county’s dog show in the Summer of 2016 and a Rat terrier/Jack Russel names Jaxsun. Travis and his husband love to travel when they have the time and spend time with their family. Travis started as a Boarding Supervisor in Dec. 2016 and since has been promoted to Assistant Operation Manager. We’re glad to have another energetic and dedicated worker here at Old Dominion Animal Health Center. 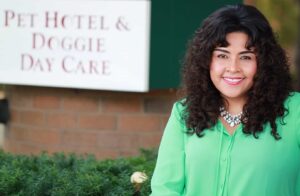 Lorena is from Potosi, Bolivia, and she moved to the USA 18 years ago. When she first started at ODAHC, she thought it would be a temporary job but shortly after, she realized how the staff had embraced her and treated her like family. This is the reason she’s stayed here for the last 18 years and counting! Lorena worked as a maintenance supervisor for a few years before getting a promotion to her current position as a receptionist.

She loves her job because it is a great way to interact with other people and provide good customer service. Lorena talks to clients by phone, sets up appointments, files documents, assists the doctors when needed, and makes sure the clients are always happy.

Lorena’s entire family is in Bolivia, but here in America it’s just she and her daughter, Geraldine. They also have a pet parakeet named Polly who was a rescue. Lorena’s daughter is working on graduating from Christopher Newport University and pursuing a career in Business Information Science. Polly, on the other hand, enjoys honey treats. Lorena’s biggest goal is getting her daughter through college, and for herself – well, she hopes to achieve more opportunities to grow professionally in this career. 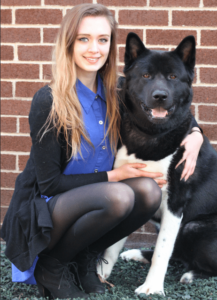 Natasha was born and raised in the Tyson’s area where she attended Marshall High School and graduated in 2015. She’s been bringing her pets to ODAHCenter since she was a little girl! It was during her senior year that she interviewed Dr. McDaniel as a part of her senior paper on becoming a veterinarian. It’s been her dream career for as long as she can remember!

Natasha began working at ODAHCenter as a veterinary assistant for a few years before she transferred to reception. She has two dogs, a Bichon Frise named Zoey and an American Akita named Kuma. She also has two goldfish who have been alive for four years! In her free time, she enjoys being outdoors and hiking with friends as well as her pets. She plans on working hard and saving up for veterinarian technician school in the future. 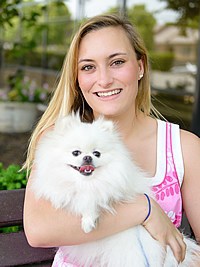 Paige grew up in the Falls Church/Mclean area and graduated from Mclean High School. She currently attends the University of Virginia’s College at Wise where she’s studying elementary education and hopes to teach second grade. With four dogs and three cats at home, she is no stranger to animals and has always been interested in their care. Paige has worked at Old Dominion Animal Health Center since 2013, and has loved getting to know all the clients and their pets. She loves being a part of the ODAHC team when she’s not away at school or doing something outdoors with her fiancé, Cameron. 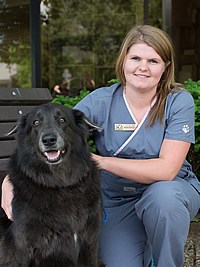 Heather was born in Winchester, Virginia and has lived in Northern Virginia her whole life. She grew up with animals of all kinds. Her love for animals is what drew her to the veterinary field. Heather started working in Old Dominion’s boarding department when she was 16 years old. She became interested in the veterinary field, so she went to tech school to broaden her abilities to care for animals. Heather has been working at Old Dominion for 16 years and counting!

Heather is married to her highschool sweetheart, Nick, who is a deputy sheriff. He enjoys working out, competing in CrossFit competitions, watching sports (Dallas), and any outdoor activity. Heather and Nick have two children, a 6 year-old boy named Landon and Savannah, aged 2.

They also have a 10 year-old German Shepherd, Trixie, and a 1 year Shepherd mix named Storm. When she’s not busy at work, Heather enjoys horseback riding, concerts, sports, going to the beach, and spending time with her family. She lists her greatest achievements as having graduated tech school, getting married, and having a beautiful family! 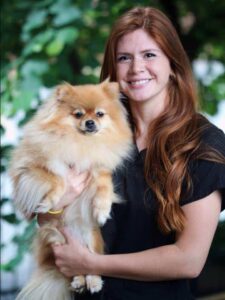 Addie grew up in McLean, Virginia and graduated from Langley High School. She started out in the field at 16 when she worked in McLean Animal Hospital’s boarding! After High School, she came to ODAHCenter to gain more experience and knowledge about the field she grew to love fondly. She is currently taking classes at NVCC in pursuit of her Veterinary Technician license.

She loves all animals but has a special place in her heart for dogs and pigs especially! 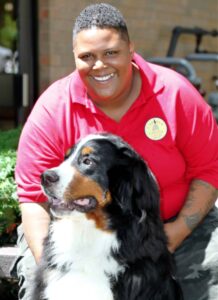 Nakia grew up in Alexandria, Va and graduated from West Potomac High School. She started working with animals at the Alexandria Animal Shelter at the age of 16, it was there that she realized her passion for the field. Being around all the stray animals in the shelter, she saw firsthand the impact that a little love and patience can make in an animals life.

She loves animals so much that she has five at home! Her household contains two dogs, a 7 year old Mastiff/Rottweiler mix named Max and 5 year old Bichon Frise named Elmo. She also has two cats, an orange tabby named Jitter who is five and three year old calico tortoiseshell mix named Zuri. Her fifth pet is of the reptile variety, a 15 year old leopard gecko named Meeko! When she’s not at work she loves to listen to music, write poetry, and paint. Nakia is also a big fan of sports, Cowboys for life. 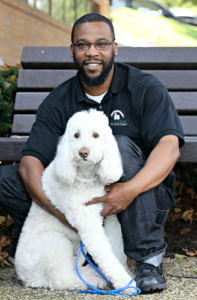 James was born and raised in Washington D.C. He started working at ODAHCenter in the boarding department back in 2004 when a friend introduced him to our practice! He is the proud father of six children, three sons and three daughters. He also has two fur children, a Cane Corso named Ciroc and a Presa Canario named Kane.

When he’s not working he likes to spend time with his wife Sharon, who is a rehab nurse! He also enjoys hanging out with the rest of his family, he especially enjoys the time he spends with his grandchildren. 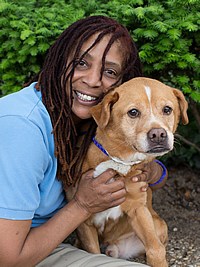 Brenda chose the veterinary field because she has a big heart filled with love for animals. A friend suggested she work with animals because every time she would see an animal, she would melt, and the animal would try to run to her (true story). Brenda works in the boarding/bathing/grooming department. Aside from handling paperwork, her main objective is to make the owners and their pets feel comfortable and reassured with love and understanding.

As a pet owner, she know there is no place like home, but if you must board your pets, ODAHC is ideal, and the staff is the best. 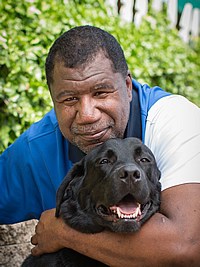 Hal was born and raised in the District of Columbia, and now resides in Prince George’s County, Maryland. When he was seeking employment, he found the opportunity to be surrounded by the animals that he loves. In his daily duties, Hal gets to bathe, walk and provide playtime for dogs, clean cages, give medications and assist the staff as needed. He loves his job!

Hal has a wife, kids and grandkids, a dog, Dianna, and his Old Dominion family. These are his loved ones. His personal interest is doing his best at whatever is asked of him on any given day, even if it is just helping someone, or talking to someone. If it will help the team, then Hal is happy to do it. His greatest achievement is just knowing that he can do something that he loves to do and see his babies (the dogs). 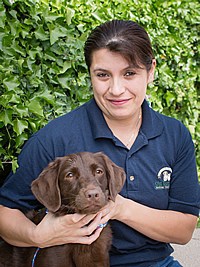 Vidalia chose the veterinary field because she grew up with animals as a child and wanted to continue having them in her life. Her job as Assistant Boarding Supervisor is to support the other supervisors with all aspects of running the boarding facility.