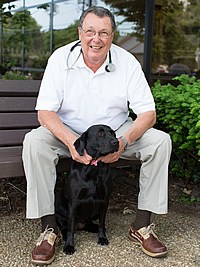 Dr. Gordon Davis grew up in small-town Ohio and started working for a local veterinarian when he was just 9 years old. He attended Ohio State Veterinary School and then moved to Virginia in 1970 to start a practice in McLean and raise a family. Dr. Davis started a two-man, one-employee practice that has progressed to one of the largest privately held practices in the Washington Metropolitan area.

While practicing, Dr. Davis focused on small animal surgery and orthopedics and he has thoroughly enjoyed the challenges of his career.  Dr. Davis’s wife is a dog and cat lover! Their son’s family includes R.J., Heidi, Spencer and Jack.  Their daughter’s family includes Bob, Lizanne, Kendall and Brady. In his free time, Dr. Davis enjoys riding horses, racing horses and woodworking. 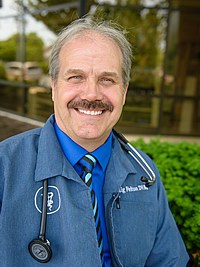 Despite having lived over half his life as a Virginian, Dr. Craig Felton is a Buckeye through and through. Part of who he is comes from these Ohio roots. For example, when he and his wife moved to Northern Virginia, they immediately knocked on their neighbors’ doors, introduced themselves and handed them a housewarming gift. After seeing the neighbors’ puzzled looks, Dr. Felton quipped, “I’m sorry, we’re from Ohio and we don’t know any better.”

Ohioans are warm, unassuming people who, despite their independence and self-reliance, will always lend a hand to a friend or even a perfect stranger. Dr. Felton considers himself lucky to work in a profession that ties in so many of the activities he loves, provides mental challenges and learning experiences to grow and rewards him with personal fulfillment. His parents recognized early on his love and aptitude for science and it was their dream for him to become a medical doctor. His father’s job as a middle school principal and his mother’s as a hospital administrator afforded Dr. Felton the learning resources and job experiences to observe doctors and the inner workings of hospitals first hand. It wasn’t until his junior year in college that two events changed his path. First, his mother lost her battle with leukemia, and second, he met a pre-vet student who gave him direct access to observing what his future profession was all about.

Unlike human medicine where all doctors are highly specialized, most veterinarians wear “multiple hats”, which allows animal doctors to follow their patients from infancy to death. They are forced to learn and become proficient in all aspects of medicine and surgery. Dr. Felton’s mother’s illness showcased one shortcoming to specialization: the fact that a serious illness like cancer requires multiple highly specialized doctors. There were more opportunities for lapses in communication and fewer opportunities for compassion and connection to their patients. Ultimately, his decision to become a veterinarian balanced his passion for science and learning with his family’s core beliefs in compassion and empathy for all living things.

Dr. Felton received a BS degree from Ashland University in 1973 and then spent a year of independent research at the Ohio Agricultural Research and Development Center. In 1978, he received his DVM from Ohio State University. He has interests in internal medicine, soft tissue surgery, ultrasonography, laparoscopic diagnostics, acupuncture (CUA), and he is a USDA accredited veterinarian.

Dr. Felton married his college sweetheart, Debbie, with whom he will celebrate 40 years of marriage in 2013. They are blessed to have 2 beautiful daughters, Kelly and Lindsey, who still have their father wrapped around their fingers. 2013 is also a milestone year as Craig and Debbie officially became grandparents for the first time. Dr. Felton is looking forward to spoiling his granddaughter and grandson and the opportunity to talk jibberish and act like a kid again. The Feltons have one male miniature poodle, Eli, who keeps them on their toes with his zest for living and regularly outwits everyone at every opportunity.

Now that he is in his sixties, Dr. Felton’s interests are a little more leisurely than athletic. His two previous passions, tennis and running, have given way to low impact activities like kayaking and biking. White water kayaking is now morphing into less excitement and more the pursuit of the zen stroke and reading the river perfectly. He still enjoys home improvement projects, especially those involving woodworking, and now that he has grandchildren, has rediscovered his love of photography. Finally, gardening has and will always be a form of meditation and a creative outlet for him.

Dr. Bo Choi grew up Seoul, South Korea. Her mother is an acupuncturist and her father is a social worker in a hospital. Her parents instilled in her a desire to help others and that greatly influenced her desire to enter the medical field. Little Dr. Choi made a promise to her friend, who often watched a recorded National Geography in Korea series, to become a veterinarian just like the ones in the videos who helped injured wild animals.

She moved to America and continued to dream of becoming a veterinarian. After graduating from Virginia Tech, she got her veterinary degree at Ross University.

Dr. Choi was married six years ago and she has a nine-month-old daughter, Dara. Among the hobbies Dr. Choi enjoys are bicycling, traveling, swimming, hiking and spending time with her family.  Her husband has two cockapoos, named Tank and Chloe, and she has a corgi named Papillion (butterfly in French). Papillion is a very jealous dog and she does not want to share her mom with any other dogs.  Tank and Chloe have to live with Dr. Choi’s parents. Dr. Choi is working very hard on training Papillion so they can live all together one day. 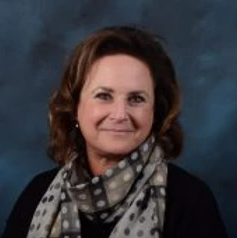 Dr. Ann Rashmir is boarded in veterinary surgery. She graduated from the University of California, Davis in 1986 and pursued a rotating internship at the Virginia Maryland Regional College of Veterinary Medicine in Blacksburg. She then completed an equine surgery residency at Kansas State University and a small animal orthopedic fellowship at North Carolina State University.  She became boarded in surgery in 1994. Ann spent many years in academia, most recently at Michigan State University, where she taught surgery, ran a surgery service, and had internationally recognized research programs in both osteoarthritis and dermatology. In addition to being boarded in surgery, Ann has a special interest in dermatology and oncology. She has authored over 150 manuscripts, book chapters and conference proceedings, one United States Patent, one App and has received approximately 2 million dollars in grants. She retired from academia in 2019 and moved to the DC area to be closer to her daughter. She enjoys doing anything with her daughter and riding forgiving horses.